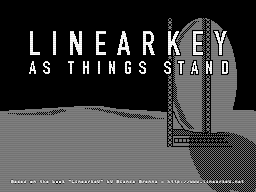 Well. I thought that the 20th game should be something bigger that uses most of the Wright! engine without adding any new feature. And this 20th game happened when I was playing both Hotline Miami 2: Wrong Number (2015) on Playstation Vita and Assassin's Creed IV: Black Flag (2013) on Nintendo WiiU. These games series, together with Dishonored (2012), launched the interesting sub-genre I call 'arcade stealth'.

While the Metal Gear (1987) series and the Tom Clancy's Splinter Cell (2002) series are more tactical, this new breed of stealth games add standard arcade games gameplay to the mix, requiring critical thinking before shooting furiously. One of the best mixes since RPG-with-anything. I decided to make a little tribute to Hotline Miami and the Assassin's Creed series with a cross-demake but, like RPGs, tactical games are often story-driven and I needed a strong one.

After talking with my girlfriend Bianca, I was allowed to make an official sequel of her free experimental sci-fi book, Linearkey (2006-2011, http://www.linearkey.net - italian only) with a good degree of freedom. So, 'Linearkey - As Things Stand' was born!

2131. There isn't anything alive on earth by years and, as a survivor, you and your fellow citizend passed your whole life under a self-sufficient dome. But someone managed to escape from the dome and discovered that the government lied: there is something out there. Why they lied? What's outside the dome? Discover the truth by yourself, hiding from enemies or killing them brutally! Use UP/DOWN/LEFT/RIGHT for moving your character. Use the A BUTTON for stuning enemies. Press A BUTTON near stunned enemies to jump over and hit them. Use the B BUTTON for running. While running, you can jump obstacles and go down buildings going over its edges. But don't forget: read the original book, which is damn good.