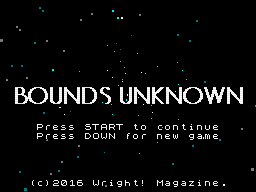 For example, can you guess how the 'scary unknown' of the main game designer Sean Murray looked like? After all, he was finally working on the game of his own dreams: a game in which the player explores an infinite space. But which genre a dream is? What you've supposed to do in a dream? Something complex or intuitive? Something multiplayer or more intimate? And will this dream be fun? What the player truly have to do? Does he have to explore the space? Does he have to survive, probably? Does he have to fight? What? For what reason? And until when? Until the end? Which is the plausible role of an ending, when put inside an unlimited environment? Since a dream is just a part of reality, how large this part have to or could be? Can it be described with recognizable paradigms in videogames? If not, what promotes a dreamy concept to a true worthy gameplay feature? Then, how is possible to give the sense of getting lost in this space? How is possible to transmit the fear of the unknown? Why not to try with procedural? That makes this game a pioneer, the most procedural and detailed galaxy ever produced! But will it work? Will this investment kill its own small company? Is there anything sure in this chaos? Yes: the game should put the player against the unknown, like in classic sci-fi novels by Isaac Asimov. But is this truly an answer? How is possible to reach this target? Graphics is enough in order to suggest the environment symbolism? Survival is the right genre for recreating this sense of loneliness and weakness? And is this enough? And there is another problem. Despite the game universe is procedural and unlimited, what happens in there is not. Regardless the company size, you have to add more and more hand crafted contents in order to keep them on par with procedural ones, until the same perception is recreated. When contents are 'too much'? 'When it's done?' When money ends?

And what about the advertisers 'scary unknown'? How they can describe a product when its features aren't clear in the first place? And how they can do this using well recognized and appreciated symbols? Will players be able to guess the game interactions viewing some clips? Which clips? From partial content? From old content? From contents that have been cut? How is possible to make lonely and mostly lifeless planets (which are pretty realistic) appealing?

And, finally, the gamers fears. What exactly is No Man's Sky? What is its point? Being fun? Being revolutionary? Display some nice graphics? Show a clever design? Which is the role of infinity in this game? Unlimited places to visit? Unlimited things to do? Unlimited things to see? What 'procedural' means? Better. What is 'procedural' in the game? The dialogues? Just the planets? Animals? Or animal parts? So, procedural means... just 'shuffling up the stuffs'? Whatever. How long this game is? 20 hours, like an average FPS? 100 hours, like average RPGs? Unlimited, like sandbox games? Which kind of sci-fi No Man's Sky is about? Mass Effect? Star Wars? What else?! Is the game 'the genre I like'? Or which is the right pace of this game? Players have to spend more time on a single planet or sprint thru more planets? What players have to do to 'complete' the game? And ultimately, what is a game content? These procedural planets? This resource collecting? This trading? These stories scattered around? And - why not - was my money well spent into this game?

Christopher Columbus in 1485 was sure that a brand new trading route to the East Indies can be extabilished sailing westward from Europe. After its painful quest for financial support and 7 years later he managed to set sail for its disastrous voyage, which led him to a totally different place. Columbus plan failed, he was wrong and a liar but still he called the locals 'indios' and never admitted to having docked elsewhere. Despite his ways, he has been fearless and discovered a New World of opportunities and deserves its place in human history as explorer, navigator and colonizer. It's all about trusting your guts, keeping an open mind and evaluating the outcome as it is. But you already know that, right?

Your spaceship crashed on a planet at the borders of the universe. How many secrets the universe is hiding? Just discover it by yourself! Controls are explained ingame, on the lower left of the screen: U/D means UP/DOWN, L/R means LEFT/RIGHT and DIR means UP/DOWN/LEFT/RIGHT. Once you've learned how to play, you can disable tutorials from the settings screen. Have a nice trip!